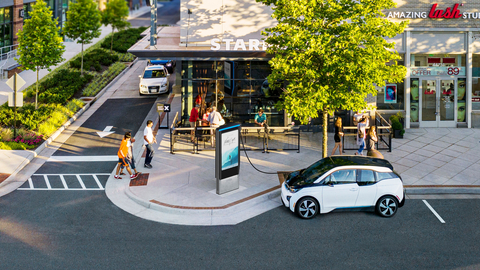 SAN FRANCISCO– Volta Inc. (NYSE: VLTA), an industry-leading electric vehicle (“EV”) charging network powering vehicles and commerce, today announced its partnership with the City of Hoboken to install 25 conveniently located public EV charging stalls for the City’s residents, annual visitors, and commuters over the next 18 months. The addition of the new Volta charging stalls will more than double the number of public EV charging ports available in Hoboken, and Volta and the City of Hoboken may partner to bring even more chargers to the area in the future. The collaboration is a model for how EV charging infrastructure can be efficiently deployed within densely populated urban areas to maximize economic, health, and climate benefits.

“An accessible and public electric vehicle charging network is an essential component of achieving Hoboken’s Climate Action Plan and becoming carbon neutral by 2050,” said Mayor of the City of Hoboken Ravi S. Bhalla. “Through this partnership with Volta, no matter where a resident lives in Hoboken, they will be within a five-minute walk of a charger, making it easier to own an electric or plug-in hybrid car. I look forward to cutting the ribbon on the first 25 stalls in the new year, which will have no impact on the municipal budget.”

Introducing these new EV charging stalls directly supports Hoboken’s climate and sustainability goals. The City released its Climate Action Plan in 2019, which revealed transportation was responsible for 31 percent of the community’s greenhouse gas (GHG) emissions—the second largest contributor behind commercial real estate. Since then, the City has installed 22 public EV charging ports and has focused on making itself EV friendly by establishing favorable zoning, ordinances, community education, and more. Supporting the transition to EVs within Hoboken also has significant health and economic benefits for residents, commuters, and visitors. Per Volta’s data planning tools, Hoboken will avoid up to 2,250 tons of carbon pollution, a key source of asthma and other respiratory health problems, through increased EV adoption through 2024. Supporting the switch from gasoline to electric-provided miles is also expected to save drivers in Hoboken up to $1.2 million at the gas pump each year.1

Volta leveraged its PredictEV™ platform to identify the specific locations within Hoboken where charging stations would be most utilized by drivers. PredictEV analyzes disparate data sources, including local mobility, demographic, commercial, and site-specific data, to provide a high-fidelity plan for EV infrastructure deployment over 20 years. Insights provided by PredictEV include expected EV adoption, optimal charging locations, the right mix of charging infrastructure, and corresponding societal benefits such as CO2 mitigation, air quality improvement, and improved health outcomes. This software is already used by electric utilities and is licensed by states to create data-driven, equitable EV infrastructure plans that maximize public investment in alignment with Infrastructure Investment and Jobs Act’s (IIJA) mandates.

“Over 80 percent of Americans live in urban areas, many of whom lack access to at-home EV charging. Public charging networks in densely populated areas are essential to moving away from fossil fuels and addressing climate change,” says John Stuckey, Vice President of Public Network Development at Volta. “We’re pleased to partner with the vibrant City of Hoboken to provide this essential service, and to do so at no cost to the City.”

“Our partnership with the City of Hoboken is an extension of Volta’s Charging for All initiative, our commitment to investing in more accessible, equitable, and affordable public charging – especially in dense communities where home charging isn’t an option,” said Kevin Samy, Head of Policy and Climate Strategy at Volta. “Volta’s media-enabled chargers generate the most value per charger in the industry, allowing us to increase charging availability, accelerate EV adoption, and create the shortest pathway to electric mobility for all.”